Yaa Jackson fly me in Airplane for the first time – Fameye

HomeNewsYaa Jackson fly me in Airplane for the first time - Fameye
April 13, 2019
- Advertisement -
OGB Music Signed artist Peter Fameye popularly known as Fameye who recently released a song with Yaa Jackson revealed that for the first time he board an Airplane happened two months ago when he were going to shoot a music video with Yaa Jackson for her hit song which He was featured on titled “Ehwe Papa” in which his bills were paid by his colleague lady musician (also an actress) Yaa Jackson.
Speaking on a show at radio universe on a show tagged “Brunch 2 Lunch” that is hosted by the blogger Zion Felix, Fameye disclosed that his passport expired recently and he has not been seen embarking on any form of journey both internationally and locally but it may seem to be unbelievable to Ghanaians but this is true as he told Zion Felix. 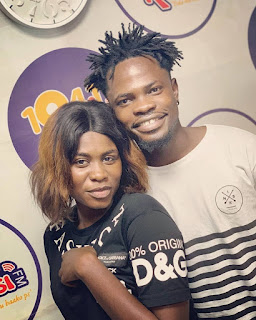 The “nothing i get” hit maker made this sad revelation with Zion Felix when he was talking about an Europe tour he is set to embark on very soon as he narrated.
Fameye continued that, even though people see him not to be one of the artists who is performing very well for his own self in the Music industry but his recent hit song “nothing i get” made him famous to music pundits, in fact this song made him known to most Ghanaian music lovers and this is the actual reason promoters in Europe contacted his management team for this Europe tour.
He thanked Ghanaians and all his fans that made this possible.
- Advertisement -
Facebook
Twitter
Pinterest
WhatsApp

Salam Kanehttps://todaysghana.com
Previous article
My ex want to chop me again because of my big Tundra – Freda Rhymz
Next article
I’m not Pressured to please anybody – Yvonne Nelson