HomeNewsSometimes i want to be Myself but its sometimes scary - Nana...
April 13, 2019
- Advertisement -
Nana Abena Korkor who was formally known to have Bi-Polar that even landed her in some unnecessary controversy in the past, but now Nana Abena Korkor has posted a video of herself o social media showing her sexy dancing skills to a song by Bruno Mars and Cardi B’s song which is titled as “Please me”.  This is not actually what you think, this video is just to reveal to people tat she perfectly fine now and she even started a recent campaign to create an awareness about Bi-Polar.
Nana Abena Korkor made this known to her fans that, she is just being her self and also she has not relapsed or anything, she is perfectly OK and fit. She is just being herself as she assured her followers.
She wrote on her social media page that, people may think she is relapsed or she is not fit to be a marriageable material or she may not be a good girl because noble girl cant do this, but this is not the case, she is just trying to be Herself and not what you think. 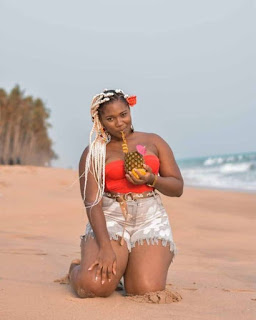 She added that many of people out there are just pretending to be what they are really not in the real world, but she is pretty happy about herself and her lifestyle so no one’s opinion is going to shut her down, because she is too proud of her own opinion.
Before you jump to a conclusion, read the caption of the video she posted,

Sometimes I wanna be myself but it’s scary because. They would say it’s a relapse Or I am not fit for a wife Or a noble girl can’t do this…Aaaaaaaaaaaaaa I let myself be. Fuck everybody.Rules r killing me. A lot of us are just wearing masks to fit in. Imma be Nana Abena Korkor Addo aka Lencyonfire ????? I am so many things I am proud of so fuck your opinion and

what u think I should be #gurl #dance in your underwear. 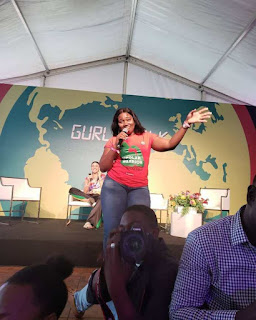 In the year 2015, Nana Abena Korkor had her n**de photos circulating on social media by then Abena Korkor was contesting for the Student Representative Council (S.R.C) President at University of Cape Coast (U.C.C). She went through hard though times on social media conversation and debates on this leaked Nudes. But in the long round it was revealed that Nana Abena Korkor had bipolar and was really relapsed that actually lead her in leaking her own n**de photos and videos online.
- Advertisement -
Facebook
Twitter
Pinterest
WhatsApp