In recent news, Kumawood Actor Yaw Dabo was under intense pressure after some unknown woman declared to the media and internet of the actor Neglecting his son for the past five years as He did not perform her responsibilities as a responsible father. 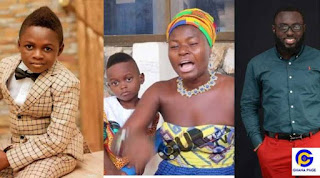 According to the lady, Yaw Dabo had an agreement with her not to mention his name when she gets pregnant and she peacefully agreed because Yaw Dabo was undergoing some financial problems and could not be able to curtail the pressure if its revealed.

She further continued to say Yaw Dabo has refused to perform his own responsibilities as a father and has ignored his own son for five years now.

Mean while the management of the actor has declared the false baby mother of Yaw Dabo wanted after she made her false claims. Management also disclosed that, the actor cannot be the father of the five year old kid, because making analysis from Yaw Dabo age, he was just 12 years five years back and he was not capable of doing the accused act.

The actor made it known to his fans that, he is not the one responsible for the pregnancy nor the baby and even claim he don’t know any of them, both the boy and her mother, therefore He thnks some haters are those doing everything so as to tarnish his image.