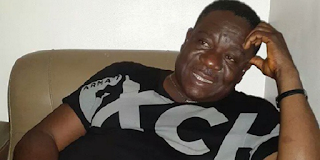 Nigerian actor and comedian, John Okafor who is widely known as Mr. Ibu is reportedly down with a severe stroke.
According to a close family source, the Veteran Nollywood actor was mysteriously hit with stroke shortly after he returned from a trip in Owerri in Nigeria.
The source further indicated that Mr. Ibu is taken to an undisclosed herbalist and is responding to treatment.
The story of Mr. Ibu’s ‘ailment’ which has come as a shock to entertainment enthusiasts across Africa was later confirmed by the president of the Actors Guild of Nigeria.
According to Emeka Rollas, he was aware that the 57-year-old comic actor was down with a stroke and is recovering.
Mr. Emeka called on Nigerians and the fans of Mr. Ibu to pray for his quick recovery.
“I am aware that Mr. Ibu is truly down with stroke, but he is fast recovering and need more of our prayers right now.” He said.
- Advertisement -
Facebook
Twitter
Pinterest
WhatsApp