Just yesterday SarkCess Music CEO was in the news for the fact being that the contract signed between Sarkodie and Strong Man has terminated and the rapper Sarkodie was not able to renew it. 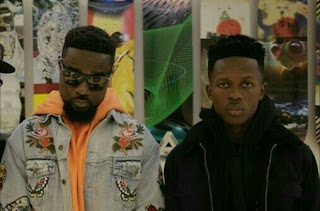 In a letter posted at todaysghana.com yesterday indicates that, Sarkodie has brought the relationship he had with strong to an end as he terminated their two year contract at the SarkCess Music. In the letter dated 14th April 2019, SarkCess Music officially announced that he has part ways with the Kumasi based rapper Strong Man formally Strong Gee, after two years stay at the SarkCess Music and so they wish him well in the near future.

The self acclaimed African dancehall king and CEO of the Shatta Movement Shatta Wale take to himself to post a statement reacting to the news emerging from his colleague musician camp.

Shatta Wale took to twitter and what he posted seems to be a teaser to Sarkodie and his team they already had some controversies some time ago in which Shatta Wale described Sarkodie as a broke artist who is now leaning on some small income or he is battling with survival.

Shatta Wale teased Sarkodie because of his failure to renew the contract after it expired. He also stated that Sarkodie inability to extend his contract is as a result of Financial power. According to him its only artist who have the financial power that can support fellow musicians and not broke artists.

He continued to make another statement that, when you are financially stable, pushing a colleague artist will be of no stress but if you cant push then your broke.

Salam Kanehttps://todaysghana.com
Previous article
Yvonne Nelson Replies Fan Who Says She Is Efia Odo’s Lesbian Partner (+Screenshot)
Next article
No man in the industry has banged me before – Maame Serwaa