HomeNewsIf I reply Sarkodie's "My Advice" His Mother will come and...
October 26, 2018
- Advertisement -

Weeks ago Shatta Wale received the advice of his life from the king of the Sark Nation, Sarkodie before the release of his reign album is is now 6 on the world bill board. This Advice from Sarkodie made The Shatta movement go crazy about the rapper, Sarkodie. Most people thinks that Shatta Wale would have given sarkodie a reply but this did not yield any result from the the Self Acclaimed Dancehall King.

Shatta Wale attacked Sarkodie in several occasions and even during the Reign Album launch which happened some weeks ago. He called the Rapper a hypocrite and a poor artist as well all being the reason that he do not support the Ghana Music Industry.

Today, in an interview with Shatta Wale on Joy FM, He said that,
For Shatta Wale to reply Sarkdie Advice, it does not make sense because he is a rapper and i am a Dancehall artist so dissing him will be meaningless and will not make sense. Sarkodie is a small boy and If i reply Him, His mother will come and beg me to stop Music. Sarkodie is my Junior in Music, i love his talent but he is so Hypocritical in the sense that his fans are now fill up with him.

He further Stated that, Sarkodie needs to be humble, they are faking it in the Music Industry, No Artist has ever come up as he Shatta Wale in the History of Ghana Music, and Ghanaians should just accept it. He again said that, if he and Sarkodie are going to be good again, He has to apologize to him live on air and he must also admit that he didnt knew what he as doing when he dissed him. With this he will take it as it is and forgive him so things will be good to be dealt with.

He further continued to deer Sarkodie to show his Properties if he think he is not a poor Artist.

Tomorrow the Fantasy Dome Trade Fair is gonna be wow, Shatta Wale will be performing live, SM fans should watch out. 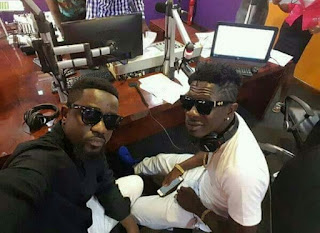