A woman who appeared in the headlines for the reasoning being that, she accused Ghanaian Kumawood actor Yaw Dabo of being an irresponsible father to their five year old kid for the past five years. 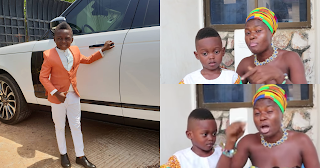 This woman who is the mother of Akua Adom has finally explained her self after her video went viral following claims she was a mother of Yaw Dabo 5 year old kid.

The alleged Yaw Dabo baby mama revealed to an Uncut show host by Zion Felix that, She has never met the Kumawood actor in her life before as she told told Zion Felix, She also continued to say that she has never in any way had any sexually affair with the said actor Yaw Dabo and so Ghanaians should not associate her comments  with him.

According to the woman, She is also an actress and the viral video was actually a footage of the a scene they we shooting dubbed “Yaw Dabo in trouble” she said the name Yaw Dabo was also a character in the skit they were shooting. She also disclosed that, she never knew the viral video will affect Yaw aw Dabo in a negative way as she told the Host.

As the interview was ongoing, she was questioned if she really know she was wanted by the police for circulating fake news about the renowned actor Yaw Dabo, and she said yes but she was waiting for her management to take the necessary step.

She used the interview as a medium to apologize to the actor and for spreading false news about him and also said she did not know it was going to tarnish his brand. She concluded that it was not her intentions to witness the harm that happened to Yaw Dabo because of her.

She also pleaded to Yaw Dabo to invite her to the premier of his new movie this Easter Saturday so she can publicly apologize so peace can prevail between them.